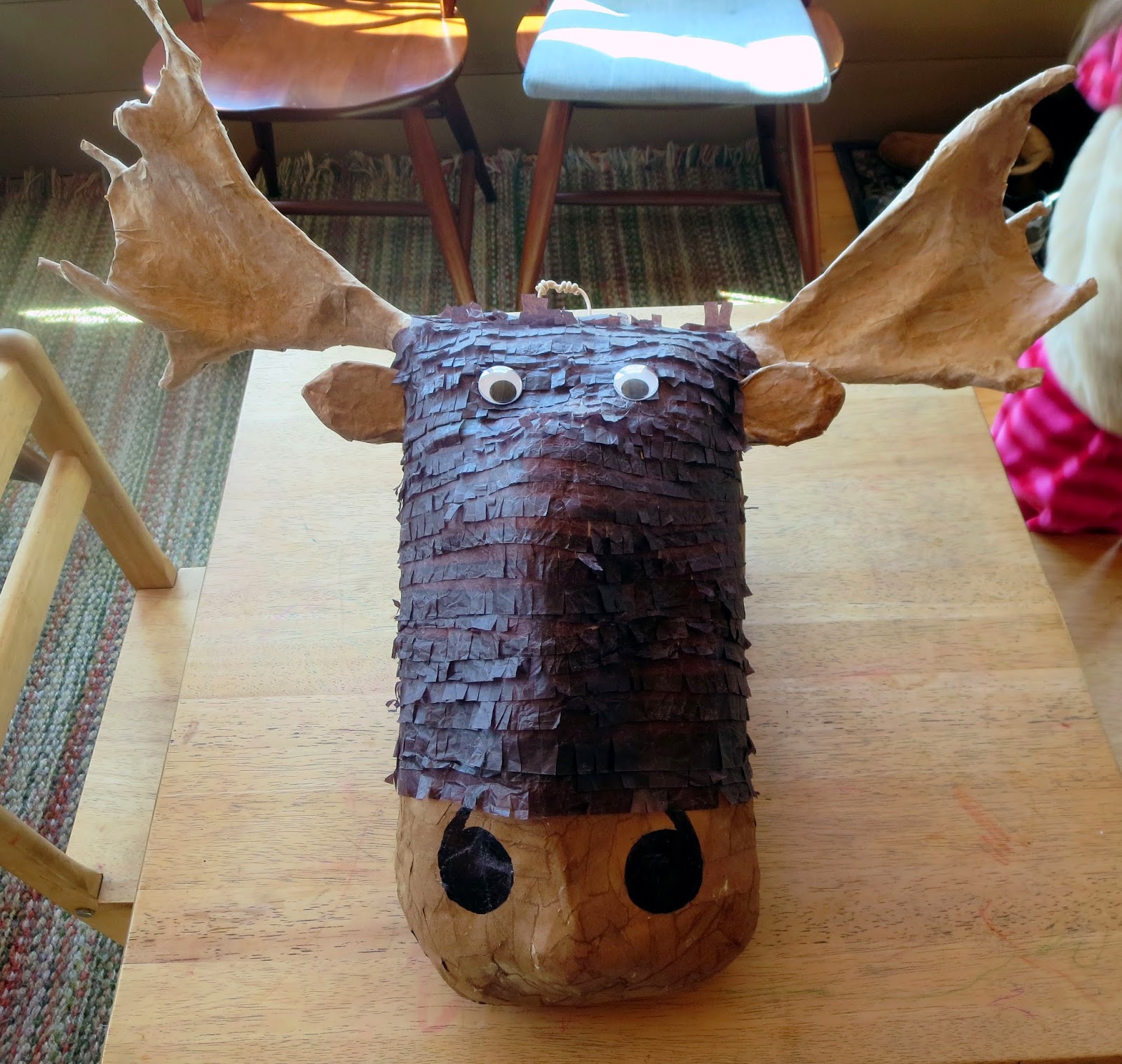 We celebrated O's 3rd birthday a little late since I was away for every weekend in March, and it was a good thing we did, because as it turns out, I needed the extra time. You see, we decided to throw her a little party. When I asked her what she wanted to do at her party, she only asked for one thing: a pinata. OK, that's great. What kind of pinata, sweet pea? A moose pinata. (pause) Really? A moose pinata? Yes! All right, one moose pinata, coming up. Who needs sleep anyway?
Funny as it may seem, moose pinata are hard to come by. By hard, I mean impossible. On a visit to the party store I scoped out the donkey pinatas and envisioned what they would look like with a cobbled on set of antlers. Pretty weak. So I sucked it up and took a crash course in papier mache and got to work.
Really, I have to credit instructables contributer mygibzone for her thorough explanation of the pinata making process, and for supplying a picture of a moose head she had done, which is what I based mine on. Her finished products are amazing, go check them out at the link above. I'll wait.
I had never done any type of papier mache before so this was brand new territory for me, but honestly, it is not that hard. Just messy. The hardest part is visualizing the finished product from the beginning, when you are taping together balloons. 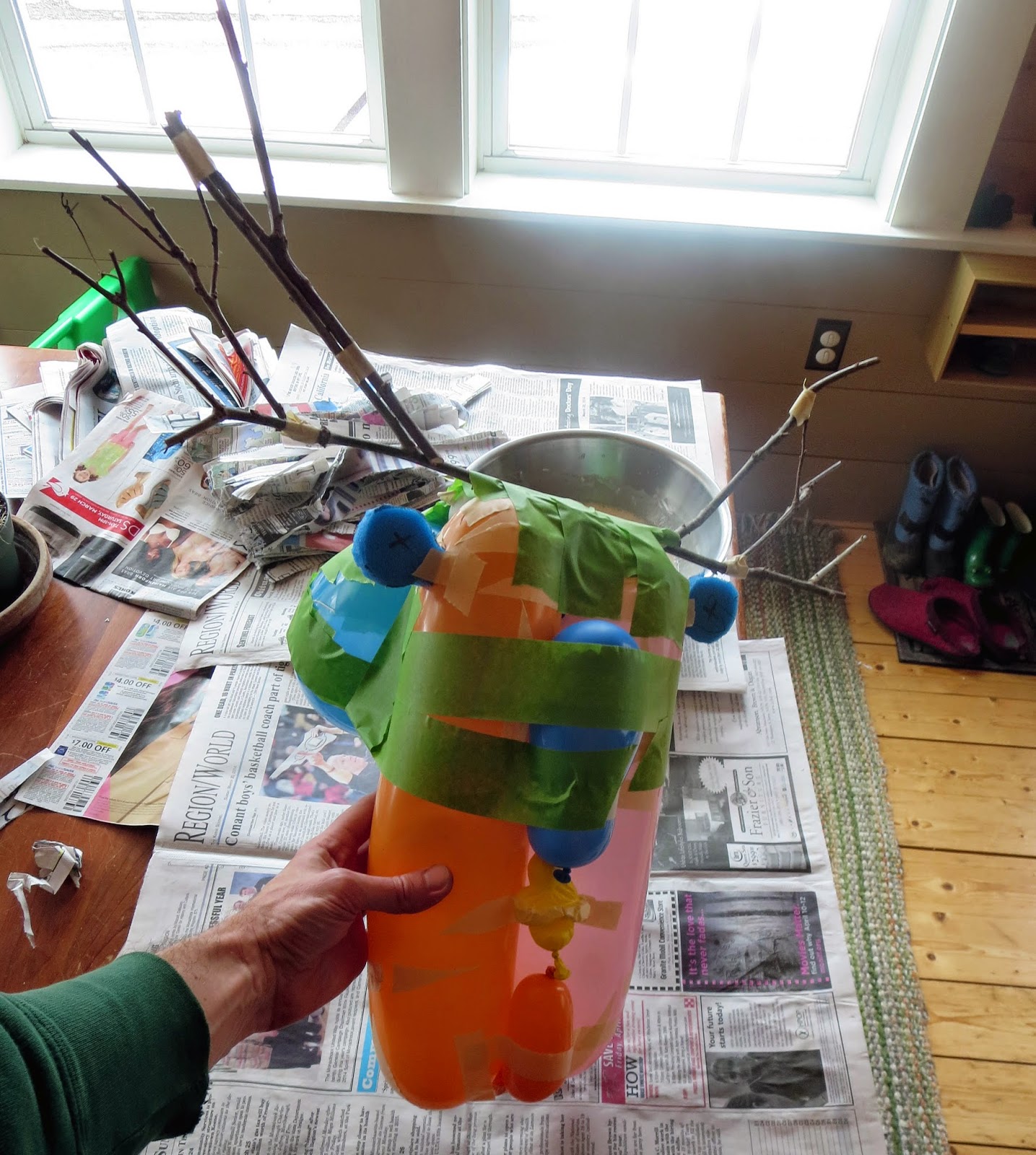 It is not an intuitive thing for my mind to do, but eventually I was happy enough with the shape to get plastering. Three or four loooong sessions later, during which I added some pretty sweet branch antlers, and it was structurally sound. 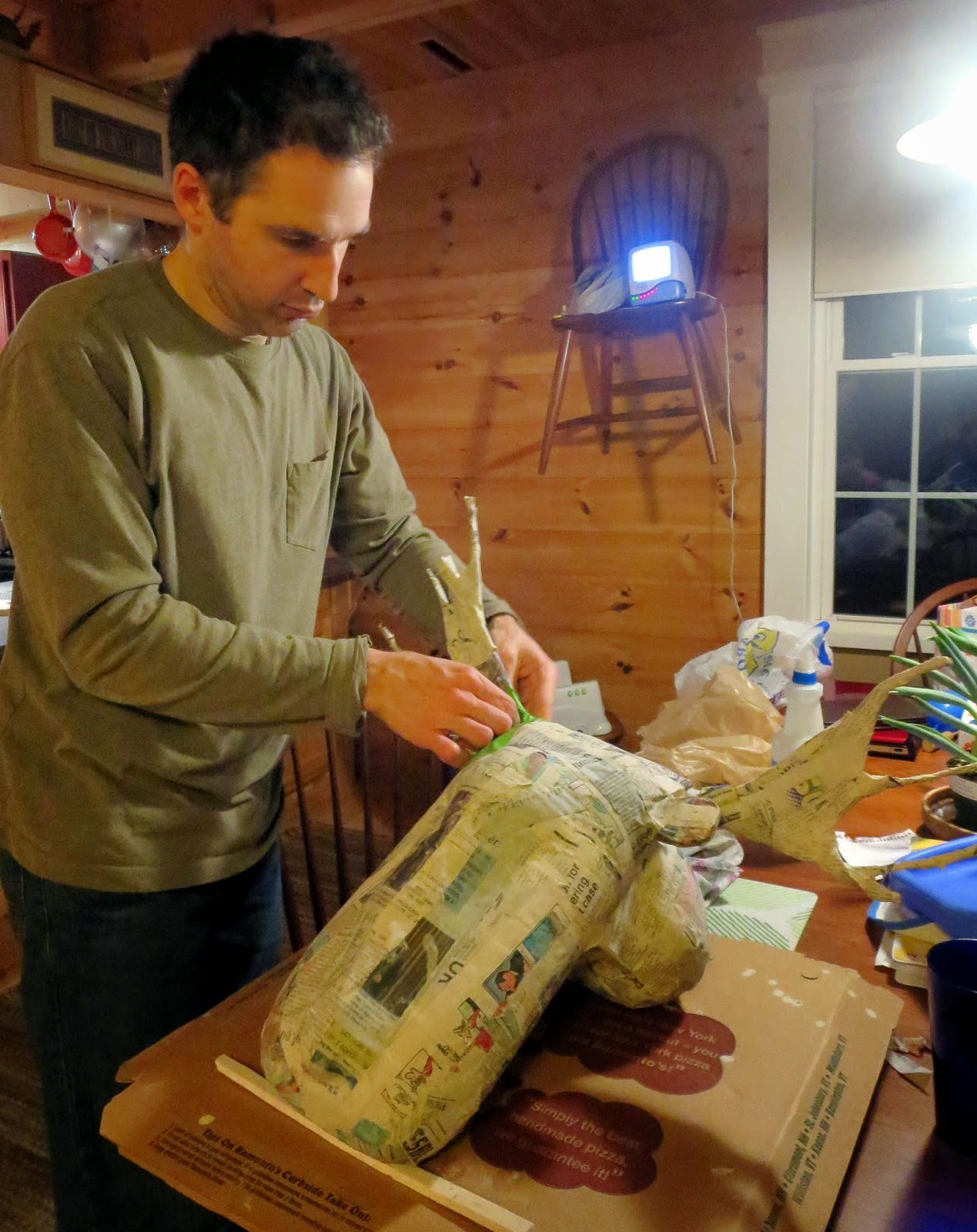 A final session for the colored tissue and other details and it was a done deal. While the entire project took me much longer than anticipated (shocking, I know), having O. help make it was worth it. 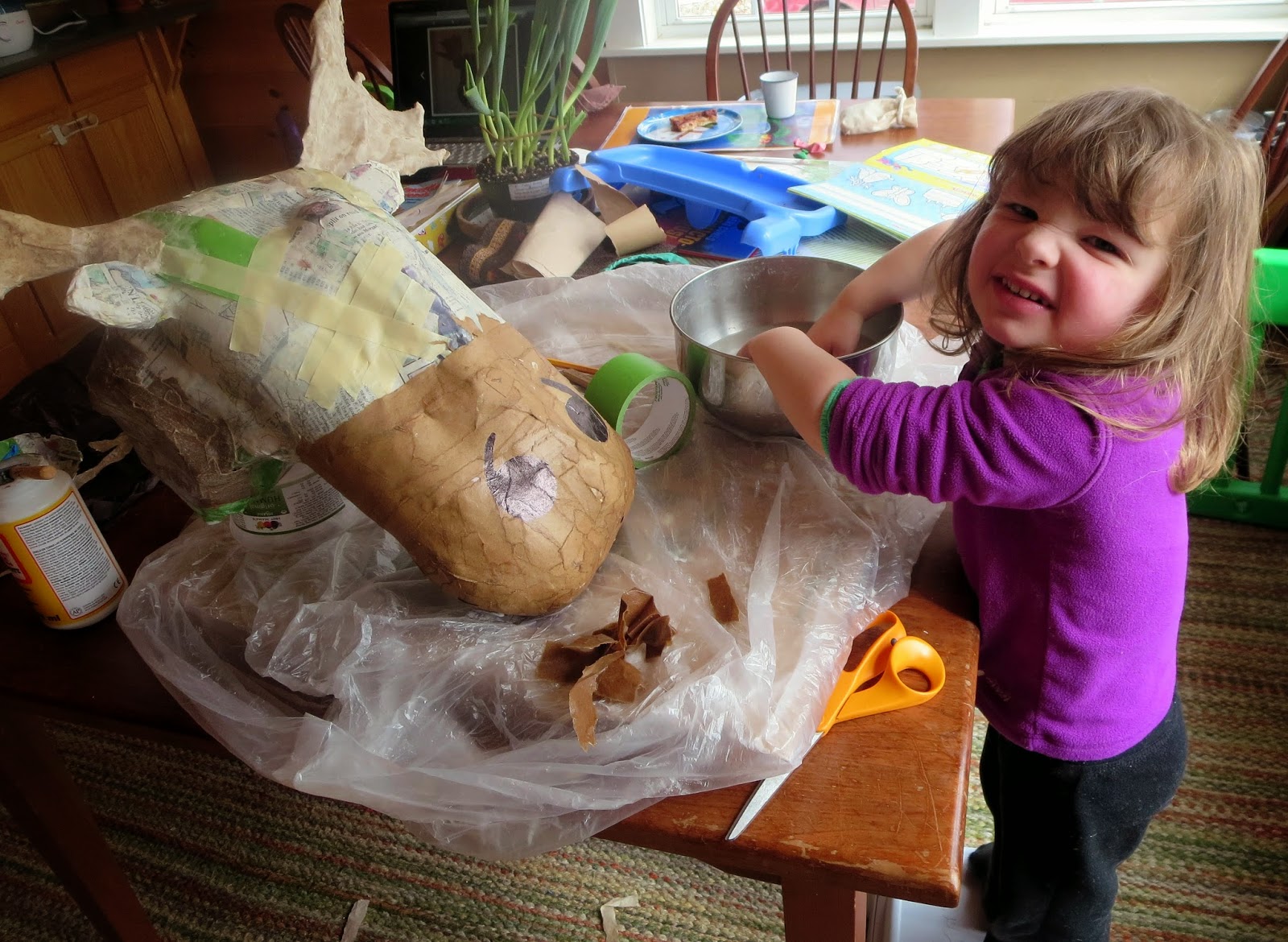 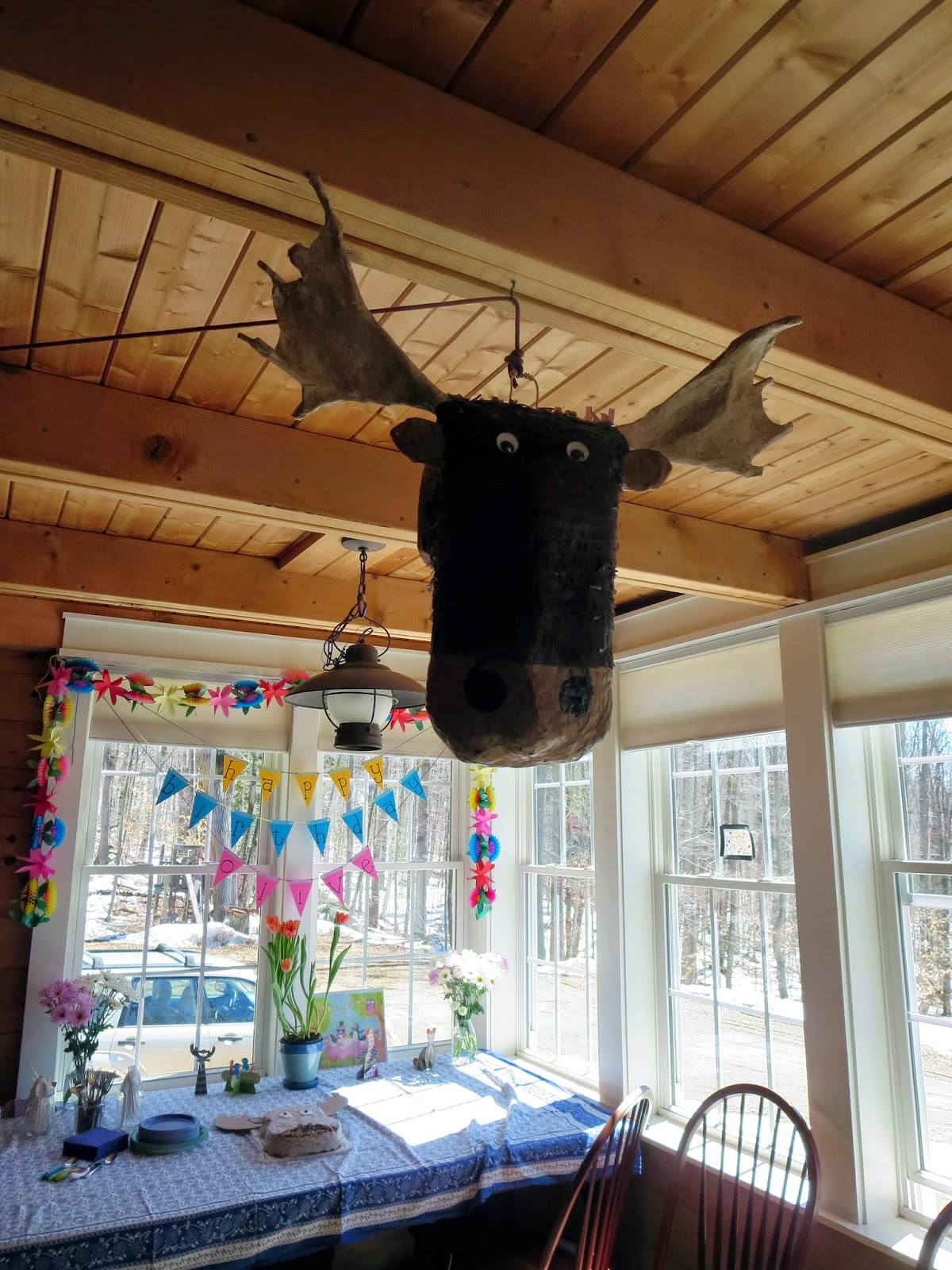 And it was much easier than I thought to watch it get smashed to pieces. After all, that is what it is for. However, I did save the antlers, and may mount them like a hunting trophy. 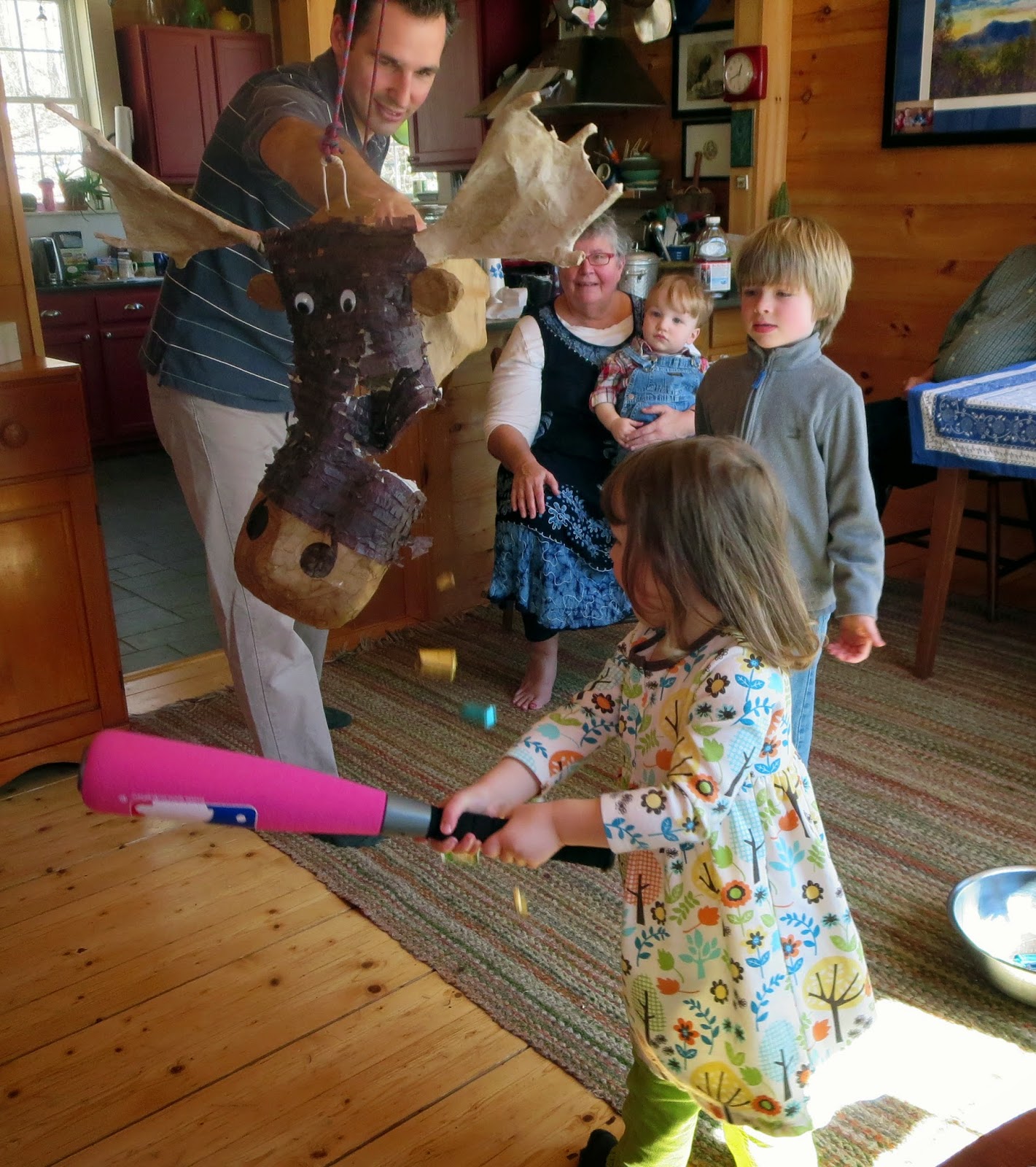 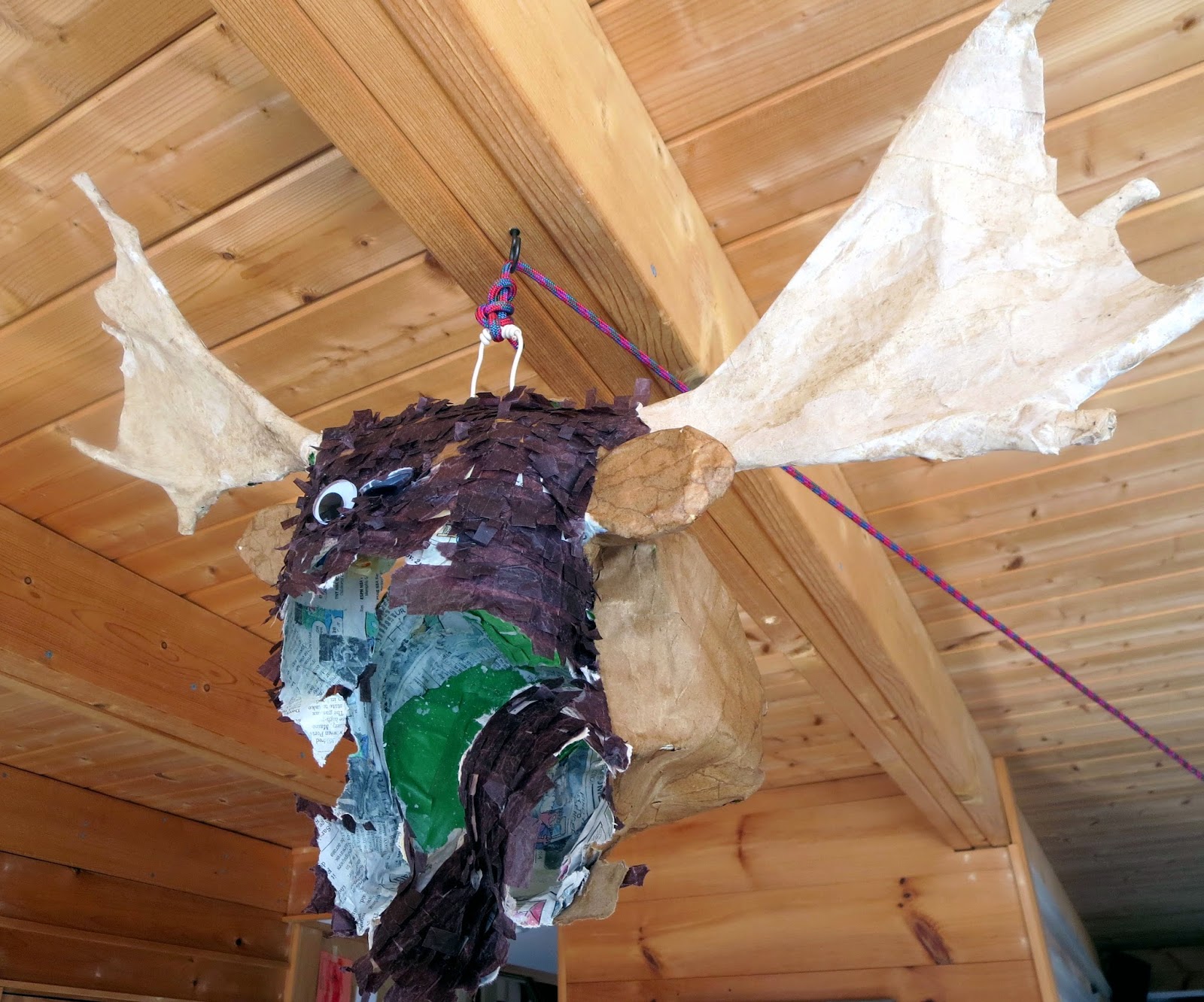 To round out the theme of all things moose, I made a carrot cake in the shape of a moose head as well. Luckily I have a guitar-shaped cake pan, which, if you turn it upside down and cut off the long neck, is pretty close to a simple moose head shape. A few details and some cardboard antlers, along with some cream cheese frosting tinted brown with cocoa powder, and it was ready to go. 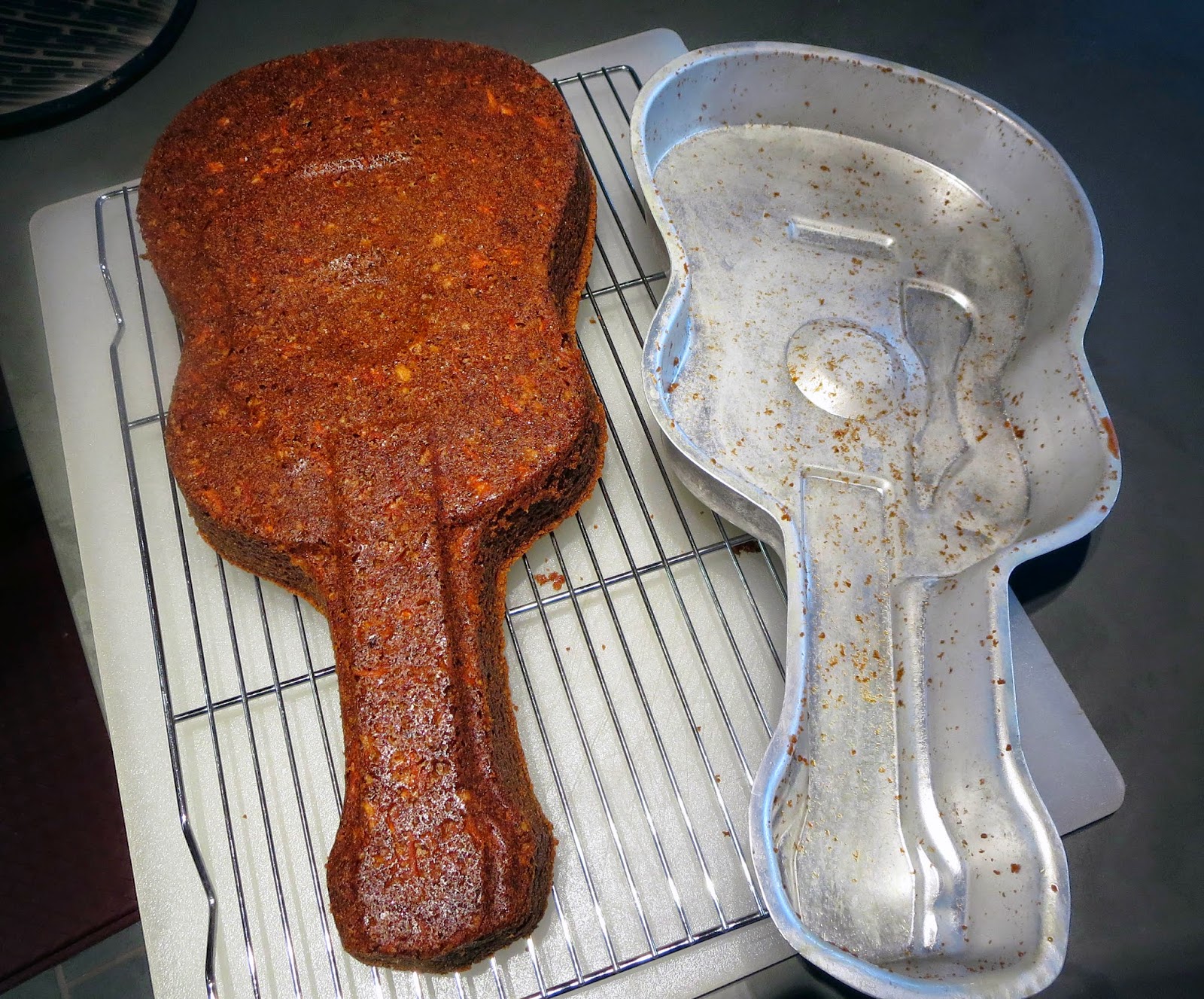 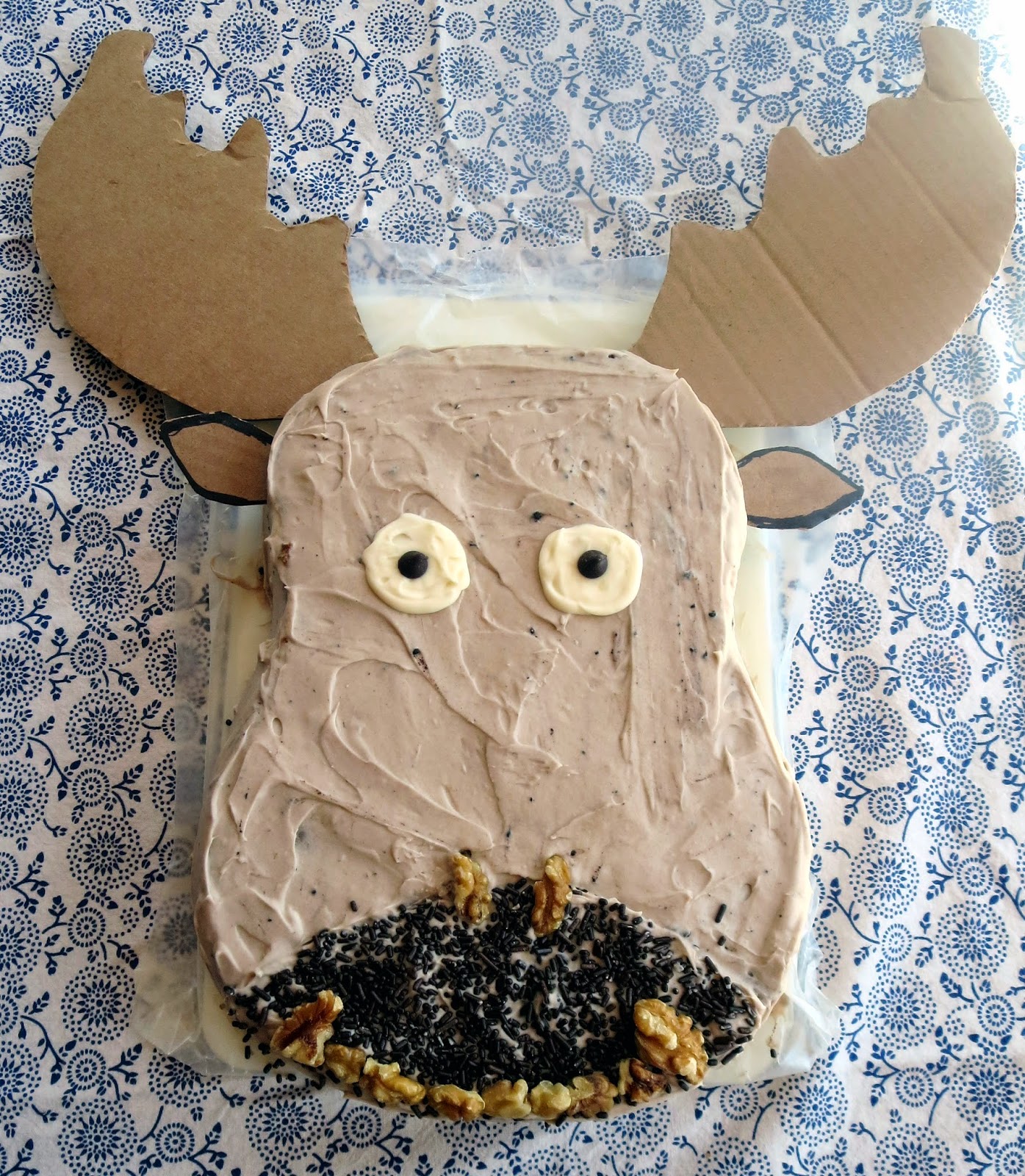 Fresh flowers, a simple pennant and some woodland creature cardboard cutouts I scored at the thrift store pretty much completed the decorating. 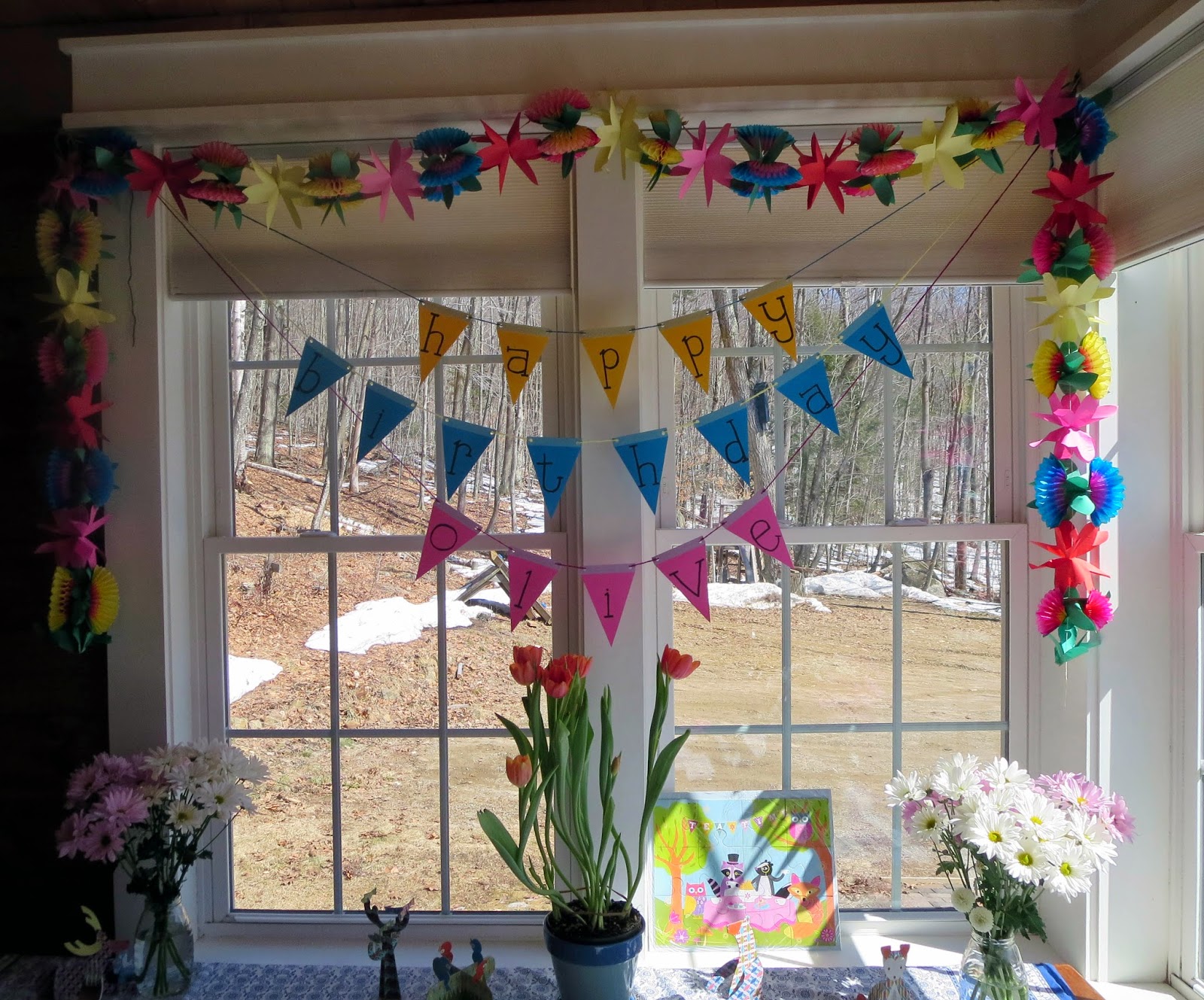 The kids spent most of the time outside anyway. All in all, a great day for everyone involved. Except for the moose. Not so good for him. 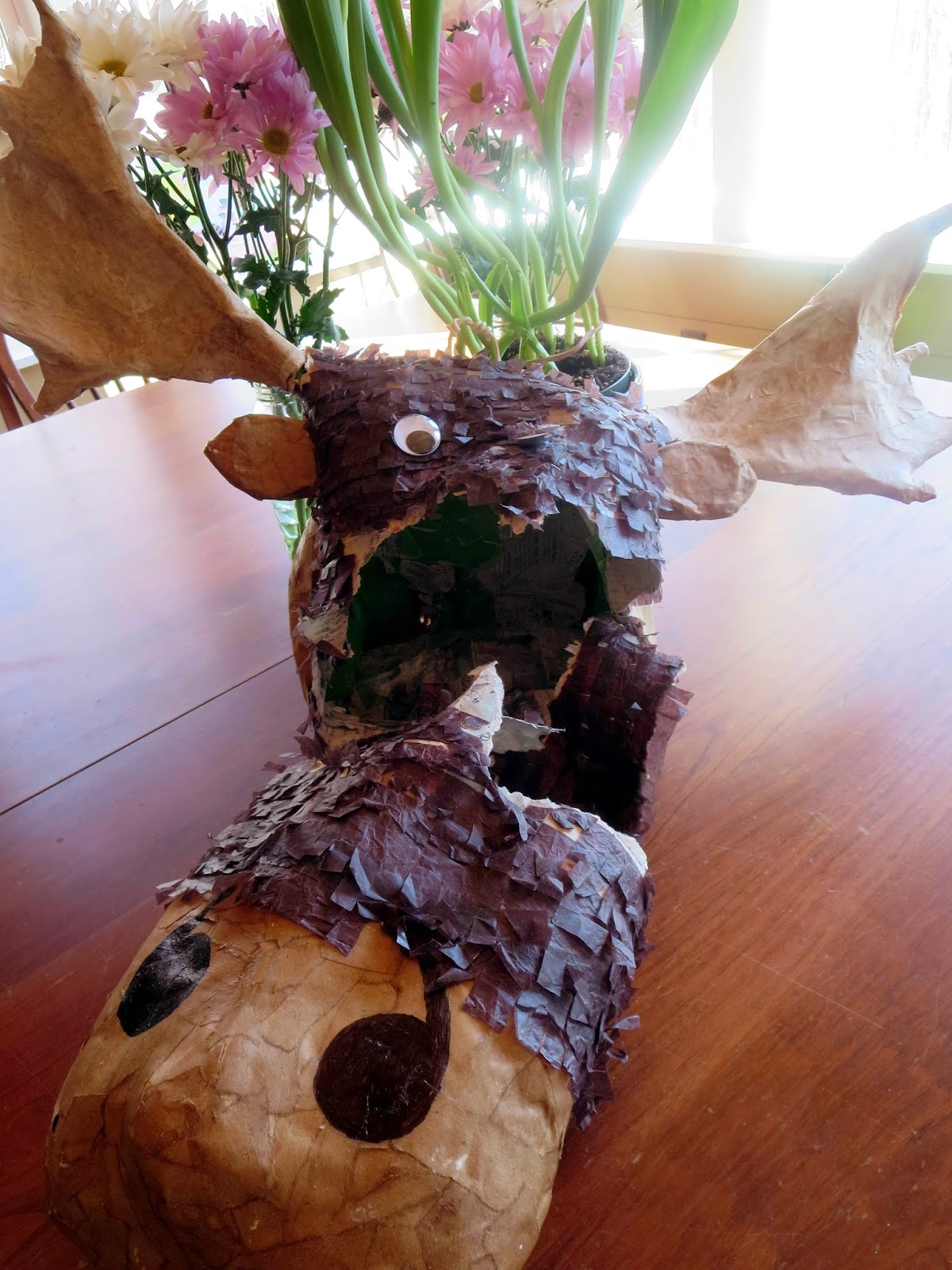 Posted by Richard Popovic at 11:22 PM