Before and After: Dresser for Woodland Themed Nursery

I can no longer recall what the ad on Craigslist said, exactly. It was something like this: Small chest of drawers, old, well loved but still useable. Needs some TLC. 39”W x 36”H x 17”D. Free. Two things about that ad caught Anne’s eye: the dimensions, which would fit perfectly into our baby’s room, and the word free. The attached pictures revealed a shabby yet charming little piece of furniture, with some interesting trim on the front. She asked if I thought it was worth grabbing, and although I was dubious about its condition, I agreed to pick it up on my way back from dropping off the trash and recycling. When I saw it in person, I immediately realized that it would have looked right at home amongst the junk I just got rid of. The frame was busted, the drawers were pulling apart and the top was curving up at the corners. Still, I was there, and my wife liked the style of it, so I threw it in the truck and took it home. Upon arrival, I quickly pointed out all of its deficiencies, tucked into a corner of the basement and promptly forgot about it. After all, the baby was not due for months, so I had all of the time in the world to peck away at it. Fast forward one year later--the baby is here and ready to move into his own room. The dresser? Still in the basement. Past time to get to work. 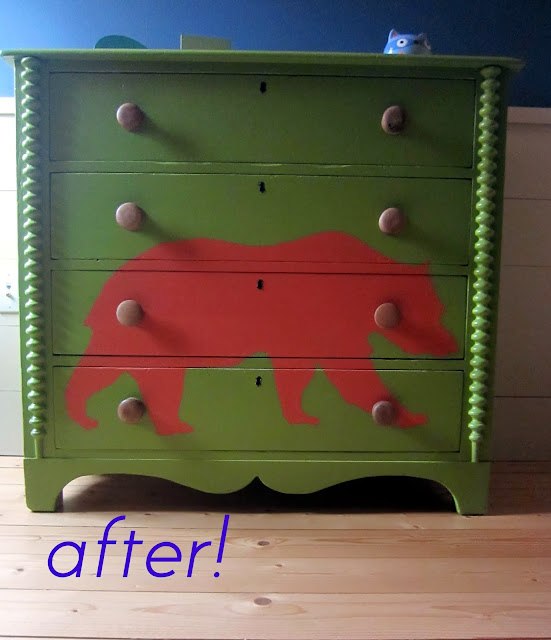 This was a long journey. The frame needed to be re-assembled, the top straightened and attached, the back repaired, and each drawer had to be squared up and glued into submission. 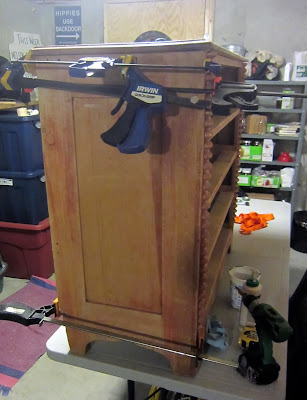 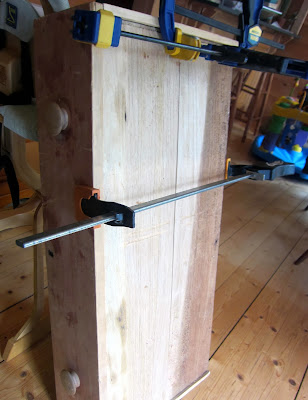 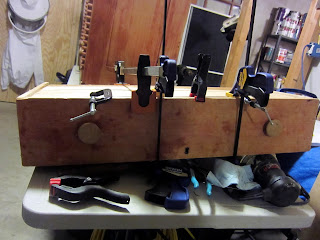 The drawers also needed stops, new runners, and addressing the freely spinning handles. And let's not get into the scraping, sanding and puttying. As I tackled all of the laborious and tedious work of repairing and undoing all of the poorly done repairs that had been done previously (note: never, ever, under any circumstances glue a handle onto a drawer front, you will seriously fuck with someone's good day sometime down the road),
I had my eye on the end game: the finish. I knew it would be painted--there were just way too many problems with it to even think of a natural finish, plus the room it was going in had plenty of wood already. But I wanted to go way outside of my comfort zone and paint a design on the front, much like this one I saw at Apartment Therapy. Never having attempted anything like this, I wasn't sure how to go about it. My first instinct was to paint it white with a colorful design on top. Anne had other ideas and came up with the lime green/rust orange combo, which I would never have attempted in a million years but am seriously in love with now.
The bear outline came from a piece of fabric from Birch called Bear Hike, which we are using as a curtain in front of a small closet in the room. 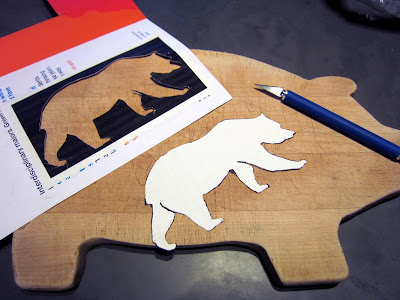 The challenge was how to get it in the size I want onto the front of the dresser. My freehand drawing ability is nil. I did it by printing out the pattern, gluing it onto cardboard and cutting it out. I then attached it to the flexible end of a drinking straw. Next I took a bright LED book light and clipped it to a mini camera tripod, which I positioned behind the cutout. By playing with the distance between the light and the cardboard, and adjusting the angle of each, I eventually got an outline exactly where I wanted it. The flexible neck of the book light and the flexible straw made this easier than it sounds. All that was left to do was trace the shadow's outline with a dry-erase crayon directly onto the dresser. Three coats of orange later and I was done. 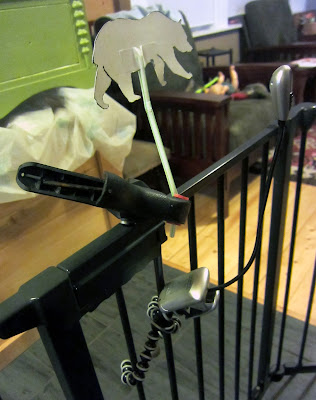 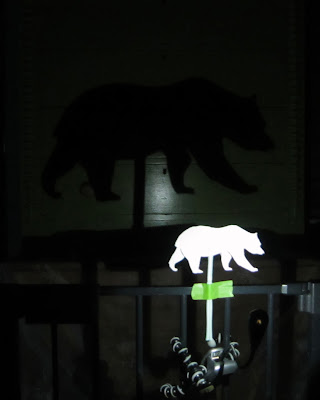 Was it worth it? Did this project pass the point of appreciable returns? Maybe. I have not counted the hours I have put into it yet, nor do I plan to. It will never be a piece of fine furniture. It will just be old, or maybe vintage if you want to be gracious about it. But it will continue to serve its purpose, like it has for the last hundred years or so. The square nails, hand cut dovetails and complete lack of plywood speak to a different time, when pieces like this were done a bit more carefully and built to last. I hope this little chest of drawers will serve as a symbol to my son about how a some effort and TLC can help keep useful things out of the junk pile and in service for another generation or two. And I really, really hope his teenage self does not ask if he can paint over the bear one day. I would understand, but I think I might die inside, just a little. 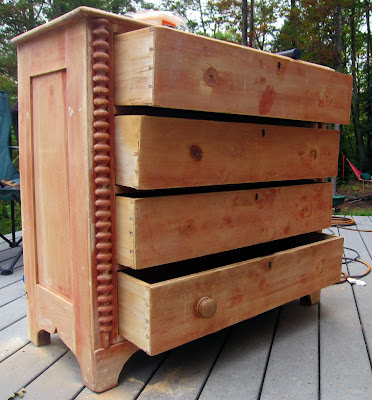 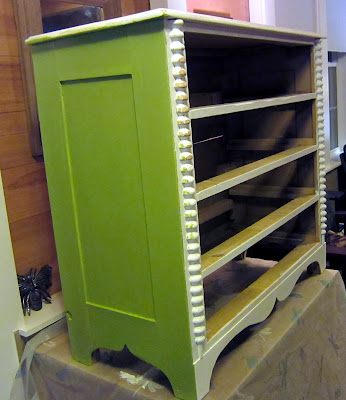 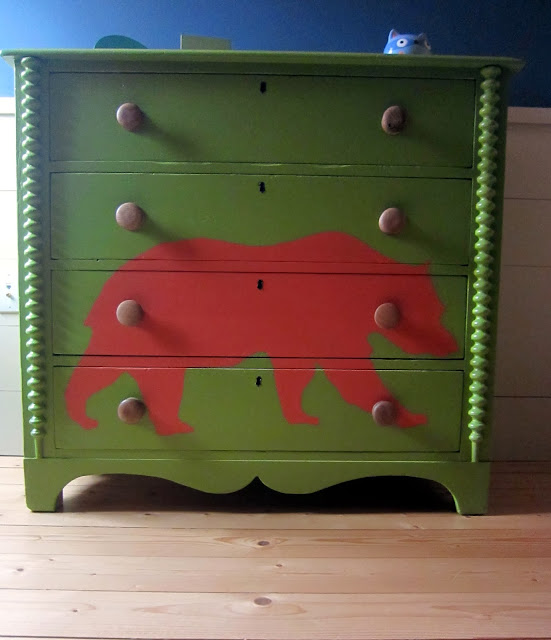 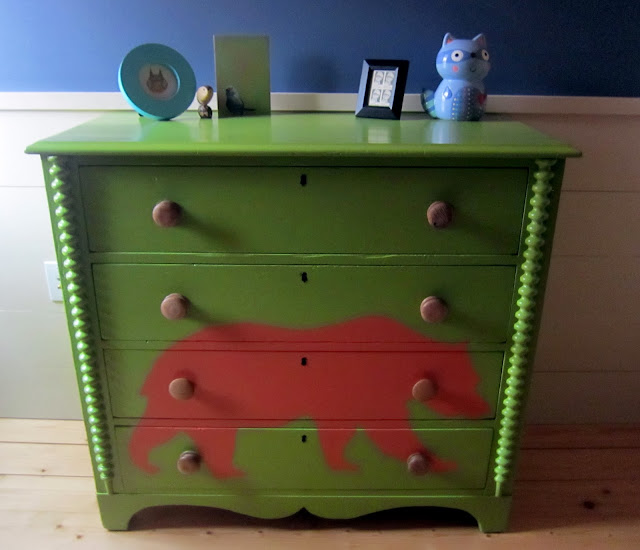 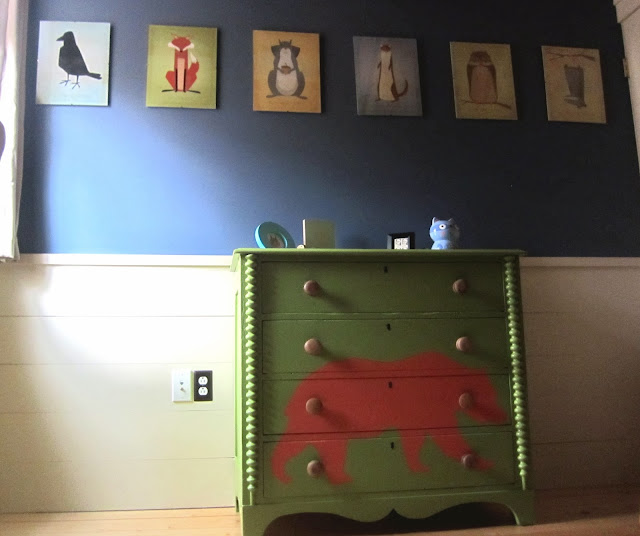 (portions of this post previously appeared as an article in the Monadnock Shopper News)
Posted by Richard Popovic at 2:05 PM

Email ThisBlogThis!Share to TwitterShare to FacebookShare to Pinterest
Labels: before and after, carpentry, diy, dresser, nursery, painting