How to Hide a Propane Tank

When I was building this house, there were a million decisions that needed to be made on a daily basis, oftentimes when under the gun with a sub contractor waiting on your word or a backhoe idling in the driveway. And with what these guys charge, you want as little idling and waiting around as possible. So while some things were planned meticulously, like the way our kitchen flows into the dining room with an extra-large slate countertop peninsula between them, other things were decided on the fly. Like where to put the 250 gallon propane tank. Of course, it needs to be somewhat close to the house. But only a fool would put it at the head of the parking area, so it is the first thing anyone sees when they pull up to the house. And only a short-sighted moron would have this space also be perfectly framed by the kitchen window above the sink, where countless hours will be spent scrubbing pots. And only a...well, you see where this is going.
So five years of staring at this thing finally got to me, and I embarked on a mission to somehow hide it, using only stuff I had on hand. Luckily, one of the things I have plenty of are saplings and branches. So as I cleared some of the young undergrowth from around the property I saved all of the promising looking sticks and branches. I soon had a pile, which I stripped of excess leaves and side branches, to get a bunch of nice whippy poles. At this time I probably should have looked at a few pics of how to construct a weaved branch fence, but I figured how hard could it be? And it wasn't that hard, to be honest. Laborious, but not technically challenging. I laid a large log across the bottom and  jammed five uprights into the ground, which I then screwed to the log for extra holding power. I then started weaving. Over the course of a few sessions, I ended up with this:

Impressive in its own way but not exactly the opaque screen I was looking for. But this was only phase one. Did mention this was only phase one? Phase two came next, which makes sense if you think about it. And I liked phase two, because it required much less work. A lot of patience and faith, but not a lot of effort.

I found some extra flower pots in the shed, some with cracks, some ugly plastic. Aesthetics didn't matter, because I was going to bury them in the hill beneath the fence, fill them with some good soil and plant a bunch of climbing flowers. After digging a few holes, inserting the pots and planting some seeds (and a few nasturtium seedlings as well), that was it. Watering was the only thing left for me to do. Watering and waiting. 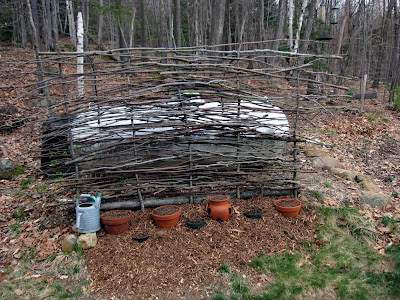 As flowers tend to do, they seemed to crawl along forever and then explode over the course of a few days. These are mostly Morning Glories and Nasturtiums, with another climbing one that I cannot remember the name of. I would spend a few minutes every week training the vines to go where I wanted, and eventually deadheading the spent flowers, but it eventually reached a point where I just let it go wild, which it did quite enthusiastically. 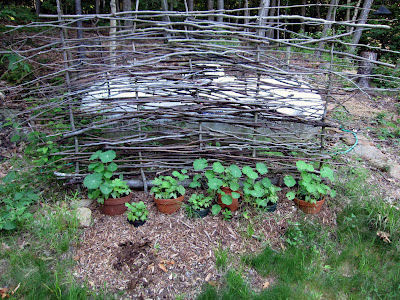 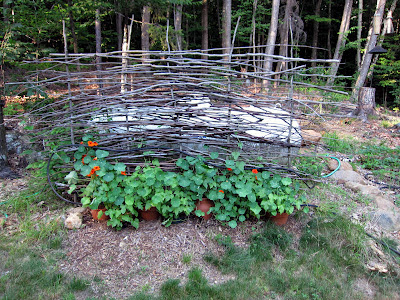 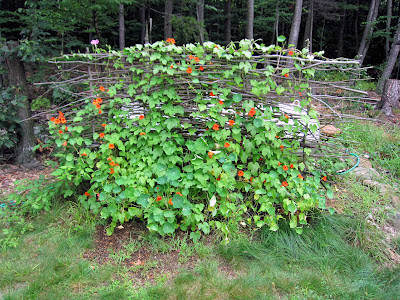 By now it is already beginning to die back a bit, although the morning glories look great in the...wait for it... morning. 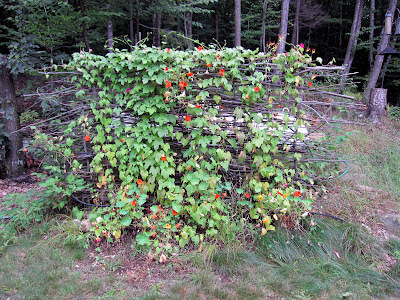 I ended up wiring the fence back to the propane tank, to give it extra help against gravity. I also plan to drive some rebar or fenceposts into the ground, since the verticals I used will probably rot out in another year or two. I fed the flowers once every few weeks with a liquid fertilizer, and I set up a soaker hose that ran off of the ones watering the blueberries. That's it. All in all, after a few seasons of new growth climbing up the dead vines, that septic tank will hopefully just fade into the landscape.
Posted by Richard Popovic at 1:22 PM