Evolution of a Blanket Fort 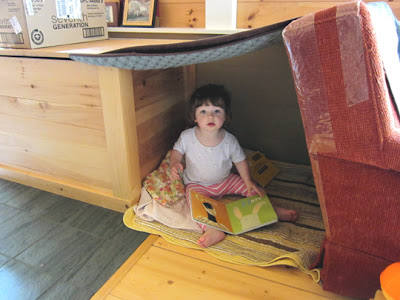 Nothing is more classic for indoor play than a blanket fort. Over the past month or so I have been tinkering with them, creating them on the fly with whatever material was at hand. I know that sounds stupid, since the materials are basically blankets and things to drape them over. But if you know me at all, you know that eventually that wasn't going to cut it anymore. Shit was going to escalate.
Fort 1 was a blanket draped between a chair and the woodbox. Technically, I think this was Fort 2, but since no photo evidence exists of our first very short-lived fort, we will pretend it never happened. Anyway, Fort 1 was a good start--cozy, easy to build, easy to dismantle. 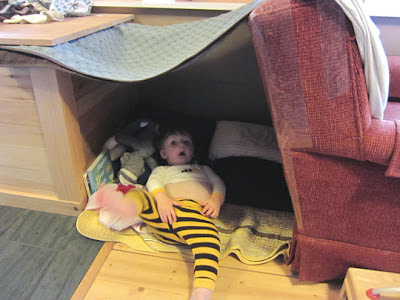 The problems outweighed the positives, though. First off, the chair had to be turned 90 degrees away from its normal orientation for it to work. Second, it used a blanket that Anne would sometimes use when sitting on the couch at night. Yes, even in the middle of summer. I know, confuses the hell out of me too. Third, the cats would use it as a hammock, which was sort of cute but got dangerous when O was inside and they started playing patty cake together. So I knew it could get better. 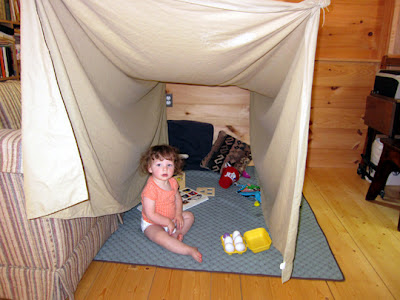 Fort 2 was better but not perfect. I used a sheet this time, so it was much lighter. But I used a good sheet from a matching set, which one of the cats proceeded to claw a few holes in. Bad kitty! Bad Daddy! The whole thing was a bit narrow, and although the head space was pretty good, it was still a bit crowded when I wanted to crawl in there. The blanket on the floor was cozy, but see above about its primary use. Plus, it got slippery when the dance-offs began (I never win). And it was generally lopsided and sloppy looking. Plus, there was an uncovered outlet against the back wall that I managed to completely not notice for a few days. Bad Daddy! But for all of its shortcomings, Fort 2 was the inspiration for... 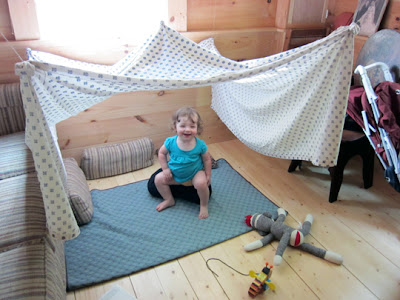 Fort 3. Light, airy, roomy, made from a sheet normally used as a beach blanket. Notice the lifted center and the delightful symmetry. Light spills in, giving an illusion of space, yet it still seems intimate and comfortable. Truly, the blanket fort has evolved into a higher form unforeseen when this journey began. All it took was five little cup hooks and some twine. It really is a great place to hang out, and we spend some quality time there every day. And I haven't even mentioned the new soft foam floor. I was saving that tidbit for last, since it is an example of a going that extra mile and having it bite you in the ass. I thought these little foam colorful mats were just what the doctor ordered. The only problem is that doctor is none other than DR. DEATH!

It seems that the type of foam used could maybe possibly send off lethal gasses directly into infant brains and jeopardize their chances of getting into Harvard, dooming them to a life of menial labor and state college. Seriously? Can't I just ignore that little fact? I tried. I really did. I wanted just say Fuck it and ignore the potential problems with the floor tiles that are probably in millions of playrooms across America. I wanted to be blissfully ignorant. I wanted to throw my laptop and its hyper-aware parenting chat rooms out the window. I wanted to revel in the fact that I grew up in the 70's and 80's licking lead paint and breathing in asbestos while sucking on vinyl toys. But...how can I? If there is a chance that this innocuous foam play mat is going to damage my daughter, even if the evidence is inconclusive and the whole deal reeks of hypersensitive paranoia, then it has to go. Banished to the basement and a new life in the laundry room, to be replaced by a 'safe' one from a very stylish company that costs four times as much. Welcome to the new parent trap.

Enough of that nonsense. Let's go out on a high note, where O shows us all what it means to make yourself at home. 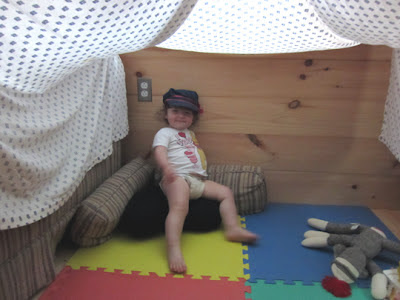 Posted by Richard Popovic at 11:57 PM

Check out my album of music for kids!