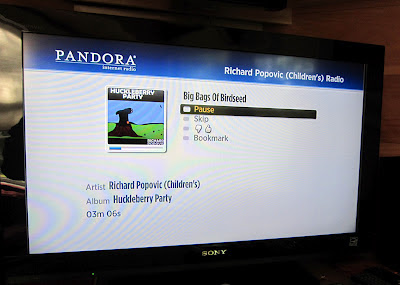 Sometime last year, I submitted my children's album Huckleberry Party to Pandora, and after a month or so I was informed it was accepted. Sweet! They told me the process was not a quick one to go from accepted to actually being played on the service, but I was in no rush. I checked in every week or two, and eventually, months later, there I was. 'Would you like to create a Richard Popovic station?' 'Why yes, I think I'd like that very much.' I set it up and wondered what song they would play first. OK, not one of mine, no biggie, I bet I'll be next. OK, not that one, maybe the next one. Or the one after that. Or after that. Or maybe at half past not in my lifetime...

I listened for a few hours a day for a week and heard the same thirty songs over and over again until I was about to lose my mind. I had no idea why a song by Richard Popovic, any song by Ricard Popovic, would not get played on the Richard Popovic station. So I wrote Pandora a note.

Hello,
I am thrilled that my submission--'Huckleberry Party' was accepted into your Children's Music category. I can create a station based on my album, and I love the artists that are played on it, but it is missing my own songs! Is there a reason why my own songs do not get played on my own station?
Thanks a million,
Richard Popovic

I'm all super-polite and positive, eager and earnest. Here is their boilerplate response:

Hi Richard,
Pandora has to abide by the Digital Millenium Copyright Act's rules for streaming internet radio, and part of this license requires us to make it difficult to predict which songs will play next, given a particular starting point.
We have to limit how frequently we play specific songs in order to decrease predictability, to prevent from being a "song-on-demand" service. We are primarily a music discovery service, that is to say: other similar artists used as seeds for a stations will bring in your songs and vice versa.
Because you only have a few songs in our system that have been analyzed so far, they will likely not play as often. It can sometimes take an hour or more for a song to play on your station – the station should be able to play all day with little repetition.
Artists who have more analyzed songs in the collection that are popular with our listeners will ultimately have more songs playing on their stations. Based on how the audience rates your songs, they can potentially play more often as well.
I hope this makes sense. Thanks again for your submission!

Hmm, I have listened for hours upon hours and have heard the same songs over and over, none of which were my own. I wrote back for more clarification:
Thanks for the quick reply. Is there any way for me to check which songs are in the system? Because if I had any it would seem like one of them would play over the course of a few hours, I have listened that long. Or at least first off--like when I play my Avett Brothers station, it always starts with an Avett Brothers song, same with most of my other stations that are artist specific.

If it is a case of waiting for my songs to get in the system, then OK, I am a patient man. But am I able to track stuff like that?

Thanks again for the quick response, good customer service is almost non existent these days!

Straightforward and to the point, and a little kiss-ass at the end, but to be fair, they were writing me back within an hour so props to them for promptness. No so much props for this response:

It looks like we have six of your tracks analyzed in our collection. We have all of the CDs, but we don't analyze every song. It's an editorial selection process, and analysts select those songs that they think will work well on Pandora.
Your songs should eventually play, but perhaps not as often as you'd like. That being said, Pandora is a music discovery service.
Hope this helps.

At least it was specific to my situation, but it didn't really shed too much light on what I was asking. Plus they could not help themselves and tacked on the 'music discovery service' bit at the end, like it was company policy to include it. I forged ahead:

This is helpful, thank you, but when I use Pandora on my computer, and I bring up my name as artist, or my album, or even a song name, there is a clickable link that says ; 'Why we are not playing songs by Richard Popovic'. It seems like the answer I am looking for is one click away, but when I click it, it just shoots me tot he general help page. That link leads me to believe there is a specific reason why my songs are not being played, even if I specifically search for that song and click it when it comes up.
I guess I want to know why one of my fans whose kids would love to hear ' Grandma Helen's Homemade Band' (or any of my other songs, or my album) can search for it, find it, click on it, and then get a song by another artist, with a link below that says 'Why we are not playing 'Grandma Helen's Homemade Band' which leads them to a page with no answer to this very question.
Not trying to be difficult but really trying to wrap my head around why this happens after my music has been accepted by Pandora.
Thanks again for all of your help--

So as much as I said I was not trying to be difficult, I really was, until I got some answers that made sense. This next reply did not fit the bill.
I understand that it's frustrating not to hear the song(s) that you've seeded a station with, but there's no way to control when or how often particular songs will play on Pandora. Our music licenses forbid us to play a specific artist or song (or set of songs) immediately when you ask for it. They also prohibit backing up to replay a song, or playing more than 4 songs from any one artist in a 3 hour period. As a result, we have to limit how frequently we play specific songs, to decrease the predictability and to prevent us from being a "song-on-demand" service.
These rules apply to all Radio services, including Pandora. They are designed to give you a reason to purchase the music you really like. If you really want to hear that song, the quickest thing to do would be to purchase it from iTunes or Amazon. You can also "rent" music from subscription services like Rhapsody for around $160 per year.
Hope this is helpful.

As they say, hope springs eternal. I felt OK with the response until I got to the part where it was recommended I go and buy the song if I really want to hear it. Umm, here's a little newsflash which should have been evident from my first email--I wrote it! I own it! It lives in my head! Is anyone listening to me at all? Is my question that difficult to answer? Evidently so, and I ultimately wave the white flag. Not without taking a weak parting shot, though.

OK, the whole 'not a song on demand' service was lost on me, it's much clearer now. So I will just be patient I guess and wait for the day when I hear songs written and performed by Richard Popovic on the Richard Popovic station. When that day finally comes I will rejoice and be glad and try to empty my head of every Caspar Babypants and Jerry Garcia/David Grisman song ever produced, which by then I will have surely memorized from all of the airplay they get on the Richard Popovic station, which I and my 1-year old daughter listen to religiously.
Thanks for your help and patience, as I mentioned before, your customer service is highly commendable, even if I do not particularly care for the answer.

Have a great day--

So I stopped listening. This was back in March. I tuned into the Dan Zanes channel instead, and that worked out fine. But just the other day, I checked out my station, just for kicks. And I nearly dropped the baby. They played one of my songs. A few songs later, they played another. Then another one fifteen minutes later. The next day it was the same thing. Richard Popovic songs were finally being played on the Richard Popovic station. Will wonders never cease?

What changed between March and July? I don't know, but it seems to me that while my song titles were in the system in March, my actual songs were not yet. At some point between now and then, they were included, and crazily enough they are played on the Richard Popovic station. And those two sentences would have satisfied me back in March. If someone could have simply said that these things take time, and artist names and titles get included first and the actual songs can take a few months to catch up, well then it would have saved me a few hissy fits.

But how hissy-fitted can I be, really, when 'Grandma Helen's Homemade Band' is sandwiched between 'Me and Julio Down By the Schoolyard' and 'This Land is Your Land'. Life is good.

Posted by Richard Popovic at 11:36 PM