Welcome, here is your complementary pie

Wouldn't life be grand if we all received a pie just for being born? What is more welcoming than a home-made pie? Sure, you--being one day old and all--can't really enjoy it. But the folks who brought you into this world certainly can. Don't worry, you'll get a shot at your own pie when you have a kid. Sort of like Social Security, but better funded and less political.


No less than three couples we know have had babies within a few days of each other recently. That's a lot of joy, not much sleep, and for me, a busy kitchen. Because all of these folks were getting a chicken pot pie. And not just one fresh one--a few frozen individual serving ones as well. And some homemade cookies too, to sweeten things up a bit.

Why do all of this? Firstly, they are all great people and we couldn't be happier for them. Secondly, we still remember how tired and lethargic and giddy we were for the first three weeks or so. Thirdly, we know what it's like to not get much and it is sort of a crummy feeling. I don't know what we were expecting, and we certainly are thankful for the people that did bring us meals, but I guess we just thought there would be a parade of people waltzing through our door with lasagnas in tow. We always did it for friends with new babies whenever possible and thought that it was an accepted practice. Well, it never really happened for us. Luckily I had made a lifetime supply of burritos and frozen them. Otherwise we may have starved.

Anyway, I went into production mode and started off by making all of the dough. I then browned and then braised chicken parts in a light stock. After about 15 to 20 minutes I removed it from the pan and immediately added some chopped veg. While that was simmering I pulled the chicken from the bone. When the veg were just about done I added some flour to thicken things, and then added the chicken back to the mix. A few more minutes, a little more stock and a few spices later and the perfect pot pie filling was done. 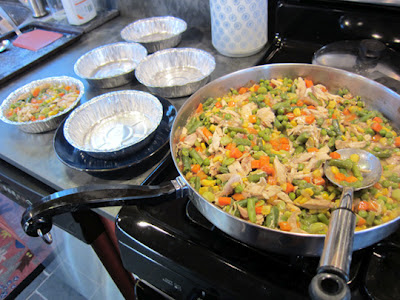 After putting the filling into pie pans I rolled out the dough, cut it to size, and assembled the pies. This is always my weak point, and my first few pies were sort of test pies, thank god, because they looked pretty sloppy. I had yet to master the fluting if the edges, plus I made the mistake of doing it with warm filling, which made the dough get really mushy, really fast. Not good. I eventually figured out the best way to put everything together and by the time I had frozen seven pies and was draping the crust on the last one, my fluted edges looked sweet.


At some point, I cannot remember when, I also made my favorite cookies, about five dozen, some of which I also froze for later delivery. They are called Everything Cookies, based on a recipe from our friends Ben and Erin, and they are full of good stuff--coconut, chocolate, cranberries, peanuts and brown sugar. Really filling and delicious.

I have only delivered one package so far, with one more due in a few days and the other not long after that. I like to round them out with a few gourmet sodas for breastfeeding mom, a nice 20 ounce local beer for dad, and whatever other little treats catch my eye. No cards or gifts--that is Anne's department. My responsibility is food, food and more food. (a good blogger would have a photo of the complete package, but that would mean I would have had to dress it up a bit and I wouldn't have been able to deliver it in a plain brown paper bag, so the photo didn't happen).

It was stressful trying to get all of this done during unpredictable nap times, with O. underfoot, or late at night, but I learned a lot and now have a foolproof and full-on finely-fluted dinner to bring to tired new parents. God knows they can use it.

Posted by Richard Popovic at 11:17 PM