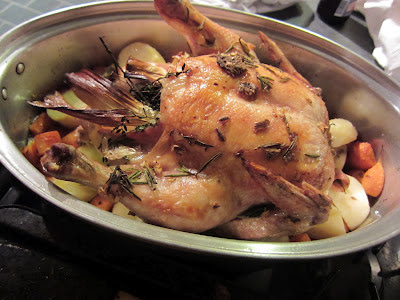 I have roasted very few chickens in my life--this was my third, I believe. I haven't been eating meat for all that long and my confidence in the cooking flesh department is not super high yet. But I saw Jamie Oliver do justice to a chicken in a very similar fashion and consulted a friend of mine who has some considerable culinary skills, so I felt pretty good following their lead. I stuffed it with lemons and leeks and herbs and rubbed it with garlic, rosemary and olive oil, and it came out great. But the cooking was not really where I was feeling most deficient--it was the carving I dreaded.


I made a total mess of the last two birds. Going off of a diagram in a cookbook I just couldn't find all of those joints where the knife is supposed to pass right through while held at a 38 degree angle. I ended up hacking through bone and with chicken pieces everywhere. This time, I smartened up and found a video on YouTube that showed how it was done, step by step. I was cooking this bird for our friends Julie and Phil. Julie is very pregnant and was craving chicken, so I wanted to get everything just right. Also being selective meat eaters, they were not much help in the carving department, although Phil provided good moral support and conferred with me on all of the major cuts, and made the last few himself. Here is the result: 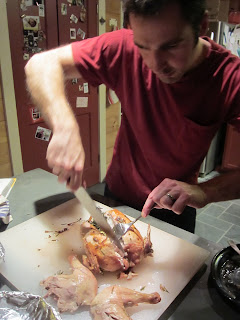 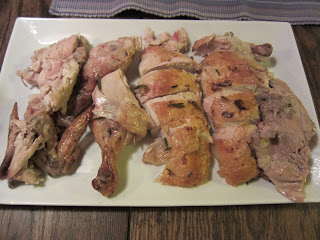 We nailed it! Couldn't have been easier, there was very little meat left on the carcass (which is simmering into soup stock as I type this) and plenty on the plate. Served with winter squash, honeyed parsnips and some carrots and potatoes, along with a cider-based gravy, and followed up with Julie's blueberry buckle and apple crisp, topped with local ice cream, this was a meal for the memory books. 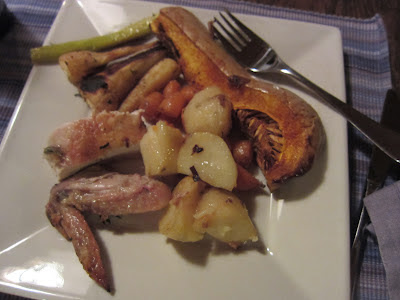 Posted by Richard Popovic at 5:00 PM