Do Try This At Home

Not having graduated to an i-Phone yet, I still religiously rock my i-Pod almost daily. Be it music or audiobooks, whether it's on my long drives to NY or just while I am cooking dinner or splitting firewood, it is constantly at my side. So when my headphones started to crap out and only work out of one ear, and then my backup pair crapped out, and then my backup to the backup did the same, I got a sinking feeling that the headphones were not the problem. The headphone jack was the issue, and I was despondent. I was caught in the very modern dilemma of the cost of getting it fixed equaling the cost of a new one. Since I hate getting rid of anything with life still left in it, I decided it was time to get drastic: I was going in.

The modern dilemma I bitched about just a few seconds ago luckily has a very modern foil in the internet and specifically YouTube. People post all types of useful stuff there and sure enough, I found two or three tutorials on how to open up the i-Pod, remove the guts, replace the parts and put it all back together. One of them seemed to be given by a twelve-year-old kid who kept saying how easy it was, and that sealed it for me, I was doing this. I sent away for the replacement part, and when I received it there was a little repair kit in there with it. No instructions, mind you, just a few random tools, including a little suction cup which I still do not know the use of. 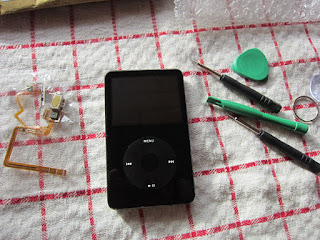 The hardest part was getting the damn thing open. It involves inserting a thin plastic wedge into the tiny side seam of the i-Pod and sort of levering it apart. Luckily I had the specific 'soft tool' to do the job. 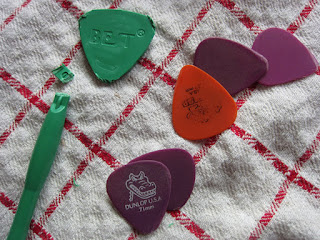 Yeah that soft tool was a little too soft and the piece of shit broke immediately. The other thing they sent looked like a guitar pick but also got chewed up. Luckily I have a large selection of guitar picks and they did the job better than any of the specialty tools. Then it was time to eat, so the project was put on hold. 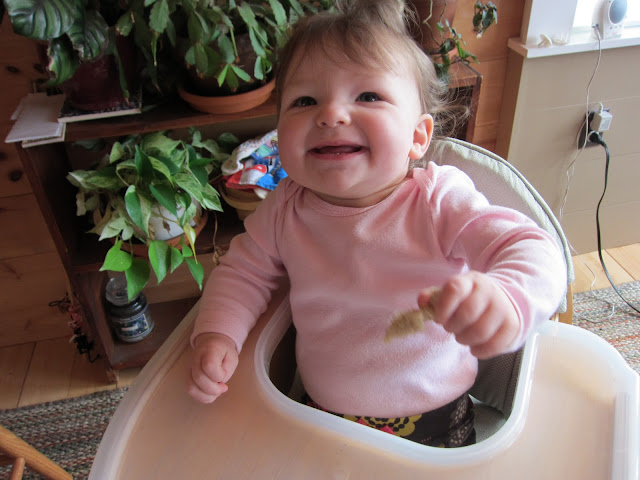 After some food, some blocks, a little Pete Seeger and some milk, it was nap time and back to work for me. As it turned out, getting the sucker open was the hardest part. After that it was a process of carefully disconnecting tiny wires and pulling out the battery and the hard drive. All I was left with was the headphone jack and hold switch, which are one unit. I pulled the old one and put the new one back in place. Not too bad, as long as you didn't lose the tiniest screws ever created. 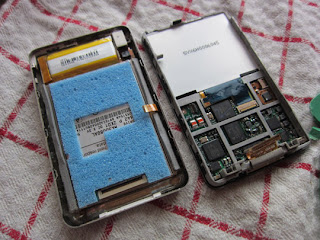 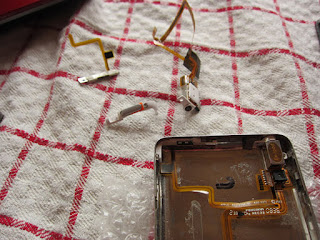 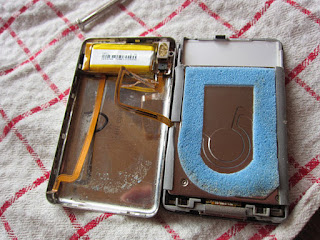 I gave it a quick test before I snapped it back shut and found my battery cable was not quite right. I fixed that and it was good to go. I lined everything back up, snapped it shut, and gave it a spin. Good as new. Actually, better than new--it is louder and clearer than before, maybe due to a superior replacement part. 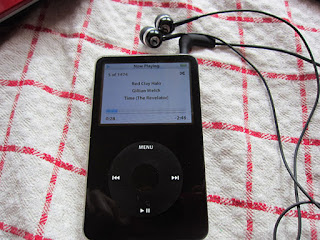 The moral of the story is give it a shot. I know nothing about electronics, but a few hours of research, a few good instructional videos, 45 minutes of work and a $5 replacement part saved me a bundle of money and saved yet another piece of e-waste from hitting the scrap heap.

Posted by Richard Popovic at 10:48 PM