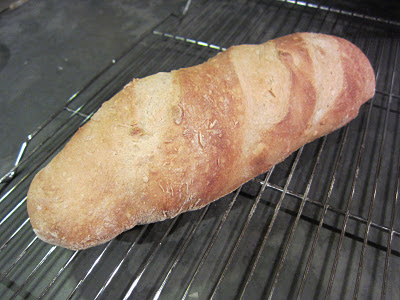 Baking your own bread has a mystique about it that is partly earned, partly not. The traditional way of doing it is a bit of a process, with double-rises and kneading and whatnot. However, I know people who do it often enough and they report it is like anything else, it gets easier and almost automatic with practice. Still, I was intimidated enough to never give it a shot until I found this much easier way, which is truly amazing, and easy enough that I sometimes find myself making bread once or twice a week during the winter. Using this method I have made many loaves and they always get rave reviews, which I bask in while modestly saying pretentious crap like 'Well, I think the crumb could have a bit more body' or 'Yes, fortunately the gluten cloak really came forward on this loaf.' I have no idea what I am talking about but it is technical enough that no one wants to reveal their own ignorance so they usually just agree and stuff their face with another piece. 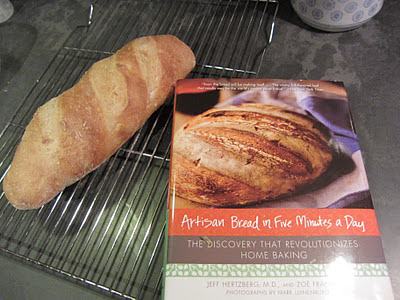 The secret is in a book--Artisan Bread in Five Minutes a Day. While I am often wary of any claim that promises to do anything in 5 minutes a day, this one actually comes through. I can literally make the dough for 3 good-sized loaves of bread in 5 minutes. The prepping and baking part later takes some more time, but most of that is rising and baking time. Another 5 to 8 minutes of hands on prep work on baking day is pretty accurate. So for very little working time I get some exceptional home-baked bread. That is a good trade in my book, especially since the loaves we like to buy from a local bakery run about $5 each.

Much like in my post about making calzones a few weeks ago, their are two things that make it all work. One is the pizza stone, which is required equipment. This method depends upon it, and rightly so. The second is the pizza peel, which while not required, makes the whole process go so much smoother I would not suggest trying it without. One more thing I use is a Kitchen-Aid Stand Mixer, which is in no way required but I already own this large and expensive piece of kitchen equipment and it is nice to justify its existence once in awhile. Plus I just use the mixer bowl as my dough storage bowl, it saves me a step.

I am not going to give the recipe here because I think you should buy the book, I just wanted to share the experience. That being said, I first read the recipe in an article from Mother Earth News, so a bit of searching and you should be able to find it. But the book goes into greater detail and offers a bunch of variations. This morning I am moving on to peasant loaves and will report back my results. Happy Baking. 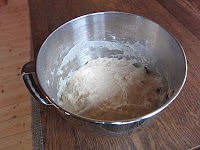 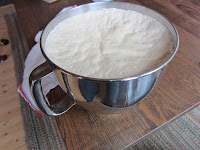 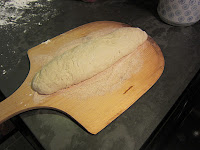 Posted by Richard Popovic at 12:32 PM