As a new dad blogger Babble's Top 50 Dad Blog list caught my attention. I clicked through the links and checked out a few and my first thought is this: Where the fuck do these guys find the time?
Read more »
Posted by Richard Popovic at 10:46 AM 1 comment:

While what seems like the fifteenth or sixteenth Republican debate garnered the usual headlines for zingers, one-liners and who called who a liar, there has been a political happening going on that has proved much more poignant, timely and ,frankly, tethered to reality.  The Occupy Wall Street (OWS) protests, which started off as a loose collection of people dissatisfied with our imbalanced economic system, has blossomed into a full-fledged movement, spreading to numerous cities across the country, even to those without a Wall Street (I’m not sure what they call their protests). And while some arms of the media and certain political pundits categorize the protesters as bored hipsters, malcontents and hippie liberal troublemakers, let’s remember how these same politicos and elements of the media embraced the Tea Party protesters as ‘true Americans expressing their outrage at a broken system’. This is exactly what is happening at the OWS protests, albeit without guys dressed up as Ben Franklin (although I bet by now someone has dressed like him for one reason or another). And the same folks casting stones at ‘selfish spoiled college kids’  demanding to get college loan relief, please remember you had no problem with ‘patriotic concerned citizens’ rallying against big government and universal health care but balking when it came to their own social security and Medicare checks.

Read more »
Posted by Richard Popovic at 4:16 PM No comments: 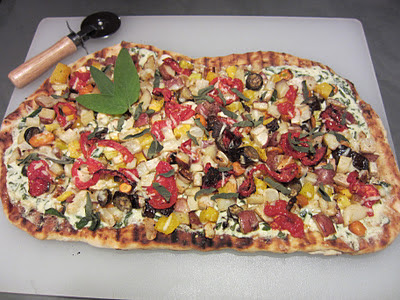 We make pizzas on the grill all summer long and they are incredible. The fire and high heat of the grill gets the dough to a perfect crunchiness with a little bit of charring. I wanted to get one more pizza in before the temps dropped too low but was lacking my usual go-to toppings. This turned out to be what my man Bob Ross would have called a happy accident.
Read more »
Posted by Richard Popovic at 8:03 AM No comments:

A Bowl of Local Soup
Recipe: Potato and Leek Soup 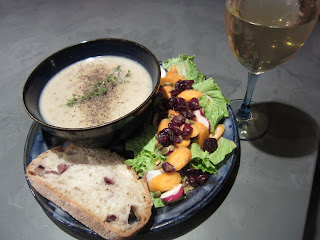 It is always a big thrill to cook an entire meal where all of the main ingredients are local ones. In this case, it was a quick potato and leek soup (recipe below) with a side salad (all veggies courtesy of Tracie's Community Farm)and a slice of kalamata olive bread from Orchard Hill Breadworks, paired with a glass of cider brewed by yours truly. This time of plenty is a great opportunity to challenge yourself to cook one or two meals a week with local ingredients, because it is so easy to do.

Read more »
Posted by Richard Popovic at 12:20 PM No comments: 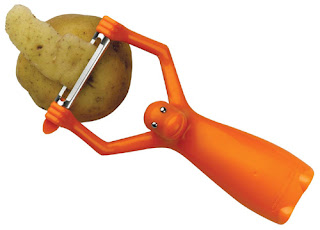 A look at kitchen tools that are borderline toys. Fun in the kitchen=Good Food!

Posted by Richard Popovic at 11:32 AM No comments: 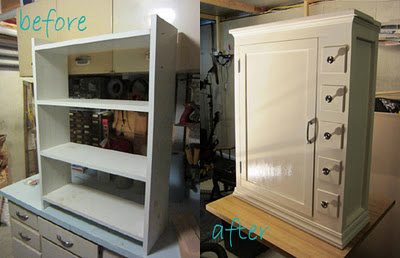 What do yo do with a set of crummy shelves that looked fine in a run-down apartment but don't quite blend in with the rest of your brand new house? Re-purpose, baby. There's a nice cabinet in there waiting to be unleashed.
Read more »
Posted by Richard Popovic at 9:21 AM 7 comments: 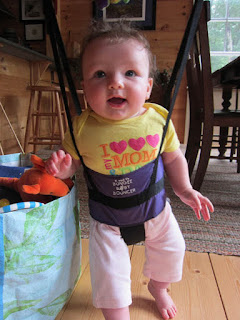 A tutorial on how to hang a baby jumper from a floor joist.

Check this out if your doorways are too wide or have no trim to hang a jumper. And if you don't like jumpers, well that's your hang up. Get it? Hang up? See what I did there? I say it's a wordplay, it's a wordplay son! Tutorial can be found over at Ohdeedoh.
Posted by Richard Popovic at 10:55 PM No comments:

Email ThisBlogThis!Share to TwitterShare to FacebookShare to Pinterest
Labels: diy, E and I Baby Bouncer, how to hang, johnny jump up, ohdeedoh, tutorial

In this house, long naps are a myth. For some reason, O. will not nap here for longer than thirty minutes. Here, in this beautiful house I built her nestled in a quiet New England hillside. Peaceful. Bucolic, even. A napper's paradise. But no, thirty five minutes is considered a good stretch. She's just not a napper. Or so I was led to believe--until this past weekend.
Read more »
Posted by Richard Popovic at 2:10 PM No comments: